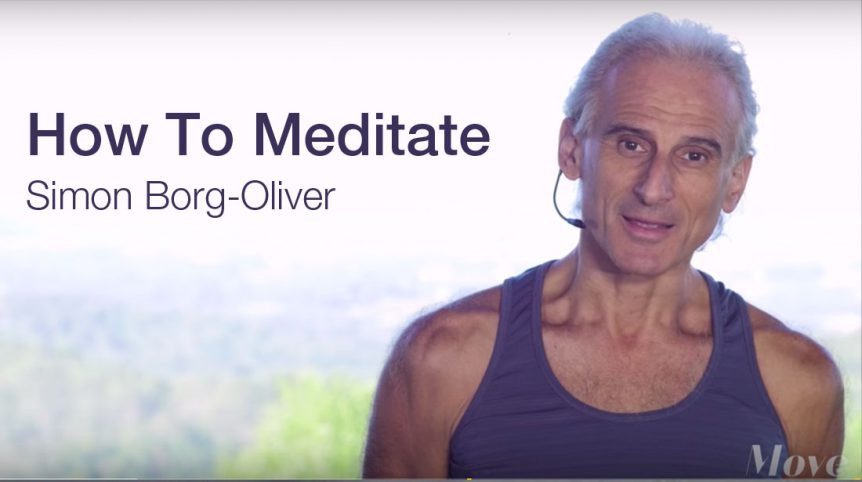 Simon was recently asked by Move123 to record a basic Meditation video. Listen  as he guides you through the basics of meditation through breath-control, relaxation and focus. Visit Move 123 at http://www.move123.com.au/

The Secrets of Meditation:

Meditation is where there is ‘stillness in mind’, ‘stillness in breath’, you are totally comfortable, totally alert and there is lots of energy and loving information circulating inside your body. This should manifest as being relaxed and warm in a cold room or relaxed and cool in a hot room. This should also include no numbness or pain in the body (especially the legs and back). Good meditation should manifest a sense of grounded, focused, well being and peace.
******
In the youtube video linked here (https://youtu.be/RGktvDz6I3E ) I describe some the key things you can do for a grounded focused meditation and allow you to have a short meditation too (unfortunately youtube put an ad in the middle ! – what to do!)
******
{More information – for those who like to read more !…}

1. Stillness in Mind:
To ‘still the mind’ may not be possible for normal people, but to reduce your thinking to one or two focused thoughts is possible. Generally during sitting meditation I find you most people get the best results by focusing on lengthening my body in all directions while making sure it’s completely relaxed.

2. Stillness in Breath:
Stillness in breath means essentially to hypoventilate, or to breathe less than normal. One of the best ways to still the breath is to simply relax and forget about the breathe while focusing on something else. You can focus on anything in fact and thus forget the breath and hence breathe less, but I find the most useful thing to focus on is simply lengthening the body in all directions while being as relaxed as possible without losing the length you’ve created in your body. Many people actually focus on the breath while trying to meditate but doing this for many people actually makes them breathe more than normal (hyperventilate) and consequently get less blood to their brain and less energy to their cells due to the loss of carbon dioxide from the body during hyperventilation.

3. Totally Comfortable Position:
To be be comfortable in any stationary position you need able to do that position without the assistance of any external forces. What I mean by this, for example, is that if you are sitting in a cross-legged position with your heels and knees the same height as your hips then you should be able to stand on one leg and be a able to lift the other leg up into the air to the same position as a cross-legged position with the heel and knee the same height as your hips without the assistance of the weight of your body (You can see what I mean by this in this video https://youtu.be/RGktvDz6I3E). Of course most modern adults can not due this and hence I suggest that most people will get a better result when meditating if they sit up straight and comfortably on a chair without letting their back touch against the back of the chair, or even by standing up with the knees slightly bent, the tailbone lengthening towards the floor and the crown of the head lengthening towards the sky.

4. Move Energy and Loving Information:
The essence of yoga and meditation is to connect or join the body, and the best way to do that is to move energy and ‘loving’ information through your body. On a physiological level the best way to connect the body is to improve blood flow and improve circulation. Most people think the best way to improve circulation is by making the heart rate increase. But this causes stress. It is far better to stimulate blood flow without increasing heart rate, either through gentle movement or by simply remaining focused on lengthening and relaxing in a comfortable stationary position.

*****
LIVE AND ONLINE TRAINING:
If you join our intensive 200 hour training in india in February 2017 you can do daily meditation with us in simple static postures, dynamic movement as well more complex yoga postures at your own level – https://yogasynergy.com/yoga-teacher-training/

Alternatively you can join us to learn the same type of material on any of our online courses athttps://yogasynergy.com/online-courses/

*****
5. Research About Meditation: (From our book ‘Applied Anatomy and Physiology of Yoga’, (Borg-Olivier and Machliss, 2011):

The most consistent findings in the many studies of meditation was the presence of some sort of hypoventilation, i.e. breathing less than normal, [Wolkove et al., 1984; Sudsuang et al., 1991; Peng et al., 1999], and coherent synchronous brain wave patterns [Badawi et al., 1984; Arambula et al., 2001; Travis & Pearson, 2000; Travis, 2001] distinct from that of ordinary waking, hypnosis or sleep [Hewitt, 1983]. However, various studies of meditation have reported the presence of levels of coherent brain wave patterns in the delta [Stigsby et al., 1981], theta [Kubota et al., 2001], alpha [Dillbeck & Bronson, 1981, Aftanas & Golocheikine, 2001], and beta [Benson et al., 1990; Sim & Tsol, 1992] ranges. For various reasons, foremost being the subjective nature of meditation, it is not always possible to determine which of the meditative practices are being examined in each scientific paper.