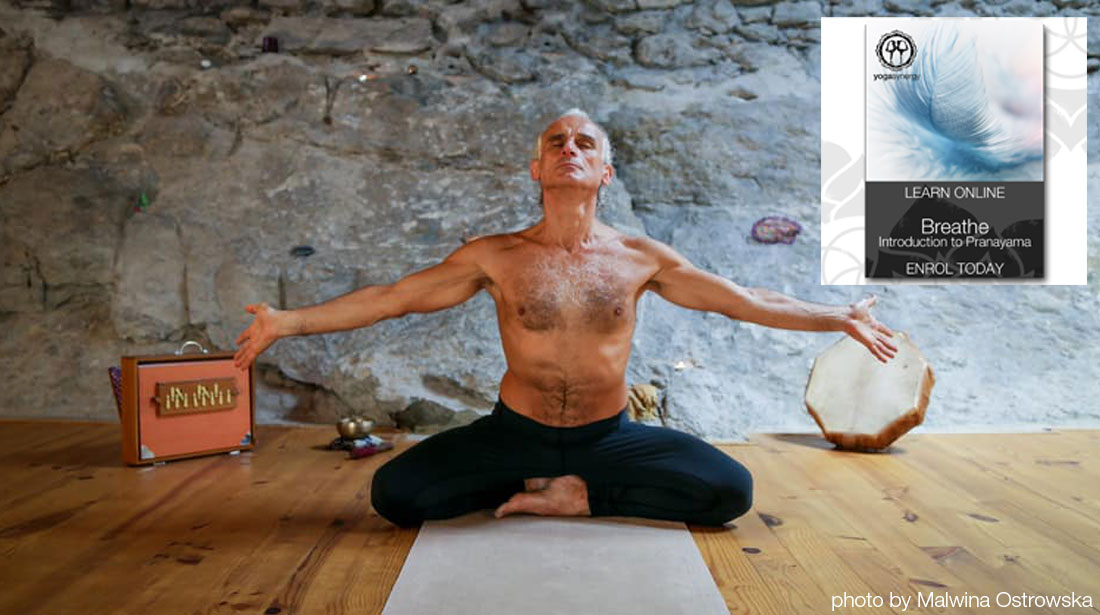 “I use yoga to lovingly encourage the circulation of energy and consciousness throughout my body to be in greater harmony with everything around me.”

Simon Borg-Olivier, MSc BAppSc (Physiotherapy) APAM c-IAYT, has been practicing traditional forms of posture, movement, breathing, and mental control for 50 years. He has been teaching for 38 years and has been a registered physiotherapist for 23 years.

Simon works as a research scientist and a University lecturer. He has been regularly invited to teach about lifestyle, posture, movement, breathing, and meditation at conferences, festivals, and intensive teacher training courses internationally since 1990.

Simon loves hanging out with his kids, going to festivals and dance parties and swimming in his pool.

Simon is the co-founder and owner of Yoga Synergy and has over 35 years experience teaching yoga, inspiring people all around the world. Bianca and Simon’s shared passion for yoga has led to the creation of Yoga Synergy daily yoga classes, workshops, teacher training courses and international events.

"My interest in yoga appears to have found me, more than I sought to study it. When I was six, my father taught me breath retentions for our underwater swimming competitions in our backyard pool. My father, George Borg-Olivier, was a free diver in the Mediterranean Sea and he taught me how to swim a lap of an Olympic pool underwater before I could swim on the surface. I didn’t realise I was learning yogic exercises – but they became something I have done my whole life, as I strive to do more laps of the pool underwater.

Around the same time, a close family friend, Basil Brown (an Olympic athlete) taught me to do Uddiyana Bandha, which I loved doing and continued to practise, again unaware that I was doing the main yogic bandhas (internal locks). At 17, I met a Tibetan lama who, over a one-year period, introduced me to the philosophy and practice of tantric yoga.

In 1980, in full embrace of the aerobics movement, I developed shin splints. A girl who was doing aerobics with me showed me a yoga ‘stretch’ (Virasana) which greatly helped, and I thought I’d tag along to a yoga teacher-training course she was doing. At the end of that training course with Eve Grzybowski, I was asked to teach, and so began my life as a yoga teacher.

Over the years, I have studied with B.K.S Iyengar, K. Pattabhi Jois and T.K.V Desikachar. I met my main teacher, Natanaga Zhander (Shandor Remete), in 1985 and had the privilege of studying intensively with him for almost two decades. The journey of yoga is ever evolving and, since 2007, I’ve continued my training with Master Zhen Hua Yang, who teaches what his family learned in Tibet and at the Shaolin and WuDang temples in China".

"I became a yoga teacher initially because a class needed to be taught and, at the end of my first teacher-training course, I was asked to do it. It then developed into much more, as I had a passionate desire to share what I’d learned with others.

I started with two classes a week at Yoga Synergy’s Newtown location, then, with Bianca’s help, the school evolved organically to become what it is today. For 10 of those years we both had full-time jobs and taught part-time.

We then decided we really wanted to follow our passion. Bianca and I felt we needed to know more about the body if we were to take responsibility for the bodies of others, and so we went back to university to study physiotherapy.

During this time we developed the Applied Anatomy & Physiology of Yoga Course that we were invited to teach as part of teacher trainings; the first one was at the Sydney Yoga Centre in 1993. We also developed our book, ‘Applied Anatomy & Physiology of Yoga', that goes with the course, the first comprehensive applied anatomy and physiology yoga text. Find out more about our Online Courses and Teacher Training Certification.

We passionately believe that if everyone had yoga in their lives, it would make the world a better place and this was why we started Yoga Synergy".

We offer Online Yoga Classes
We offer Online Courses for in depth study and skill development.
Start your journey to full accreditation. Our 200 hr Online Teacher Training program  can be started anytime.  Register your interest for  2022
We hope to resume our usual face to face workshops in Australia, Bali, India and Italy ASAP.

You’ll learn yoga that is based on a deep and sound knowledge of anatomy and physiology, modern medical science and traditional hatha yoga.

Are you a Yogi? namaste!

We offer three online courses for Yoga Teachers that may be of interest.

We can teach you to be a better Yoga Teacher. Find out more.

This is yoga and a health approach that can take you through the rest of your life.  No gimmicks. Endless learning and understanding.

What Others Say – Online Courses

Thanks for a fantastic course, Simon! I've been learning a tremendous amount from you. After some 6 years of Ashtanga vinyasa, I listened to a couple of interviews with you, and your approach resonated with me. My teacher introduced me to your fundamentals. I bought the videos of the fundamentals series a year ago, and have been practicing them on alternating weeks with Ashtanga Vinyasa 1st and 2nd series. I felt comfortable that I understood the basic principles but found some of the detailed instructions a bit too fast to follow or remember to do on my own. I feel that the Asana Biomechanics 84 postures course anchored the Fundamental Series in a broader context, and gave me a better understanding of the nuances of Yoga Synergy. I will go over the downloaded videos a few more times over the next few months, and then see which of your other courses might be a suitable next step. Thanks again!

We have seven online courses for Teachers and Yoga enthusiasts. Please try a FREE lecture.