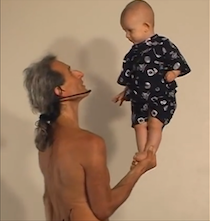 In this 9 minute video I am using my understanding as a physiotherapist and yoga teacher to give exercises to my 9 month old son Eric. This training takes advantage of the natural spinal reflexes that are most prevalent in babies. These spinal reflexes help to facilitate the  exercises that I am getting him to practice. I think it beneficial to gently and intelligently introduce the first stages of these exercises from as early as one day old. At the end of the video you can see some photos of how Eric and his sister (who was given a similar program as a baby) have developed up to about 7 years old.

Babies and children can be exercised from a very early age. I believe it is important to play with your children and also to massage them. I would like to also emphasise that you have to be careful with what you do of course, and always monitor your child’s reactions (for example smiling or crying).

Many people tend to be overcautious with young children when actually even babies are quite resilient and really thrive with physical stimulation. As in the case of adults it is important to build up to each new exercise in a slow, gentle and progressive manner. Also for children it is important to not pull them unexpectedly by their arms or legs as this may damage their joints, but with gentle training even babies can use their own strength to hold their entire body weight.

The main spinal reflex that I take advantage of is the ‘stretch reflex’ (myotatic reflex). The ‘stretch reflex’ causes the reflex activation (tensing or ‘switching on’ of any muscle that is unexpectedly lengthened by a force that is external body (such as gravity or the use of another persons limbs). I use this reflex with Eric, for example, by having him sit up cross-legged and then while holding his thighs I (an external force) gently try to push him backwards (spinal extension and hip extension).

In another exercise I balance Eric on my shoulders and then I move suddenly causing Eric’s legs to move away from my shoulders and causing his inner thighs to unexpectedly lengthen. The sudden lengthening of his inner thighs initiates a ‘stretch reflex’ activation of his inner thigh muscles, which enable him to squeeze his thighs against my shoulders so as to not lose his grip. The same principle allows Eric to stand on my hand. Although his balance is not yet developed, so he can not stand by himself (and would not encourage standing at his age anyway) he nevertheless has no problems standing on my hand because as soon as his knees want to bend with gravity the muscles in front of the knee (knee extensors) become lengthened by the (external) force of gravity and cause a ‘stretch reflex’ activation of these muscles to keep him standing.

All of this work can be also applied to adults in similar ways.

This video and lot of related information for adults is taught in the Yoga Synergy online course ‘Applied Anatomy and Physiology of Yoga’ as well as the live 200 hour ‘Yoga Synergy Teacher Training’ Courses.