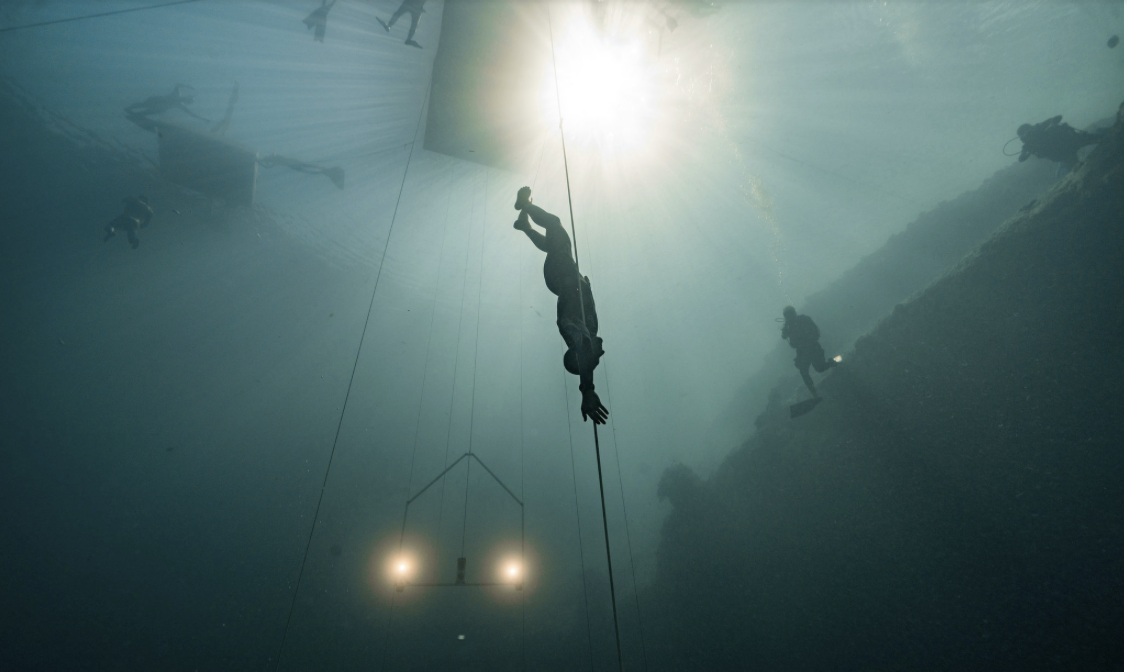 William Truebridge beginning his world record-breaking free dive where he is effectively travelling underwater for the equivalent of 5 olympic pools underwater in over four minutes.

A few days ago my inspirational friend, amazing freediver and inspirational yogi William Trubridge has just broken his own world record twice in two days by diving down 124 metres and coming back up with just one breath. This article describes the event and lets you hear from William himself. You can see two short videos of this below. In the first video you here from William and others about the dive and his experience.

In this second video you see how William extended by one meter the record he himself set in 2011, 121 meters — he pulls himself slowly along the rope, conserving energy, traveling a distance well beyond the height of the Statue of Liberty. He then breaks through the surface, filling his lungs with deep, purposeful breaths.

This is another very inspirational video from a few years ago where you can William Trubridge break the world record in Unassisted Freediving with a dive to 88m (288ft) in 3 minutes 30 seconds. Since that time he succeeded in going to more than 100 metres unassisted (i.e. with no rope or fins or weights). The dive was also set at the Vertical Blue Invitational Freediving Competition in Dean’s Blue Hole, Long Island, Bahamas.

I have been priviledged to teach yoga on two of Williams advanced free diving courses. William is an exemplary yogi. His pranayama is immaculate. He can comfortably hold his breath in for 7 to 8 minutes or more and can hold his breath out for for about 4 minutes doing uddiyana bandha. In this video before he goes underwater you can see him breathing into his mouth to ‘pack’ extra air into his lungs under pressure. This so called ‘packing’ process is related to the hatha yoga pranayama technique referred to as plavini, one of  the ‘mystical’ nine main pranayamas, which is only loosely described in the texts and is often said to be when  you swallow air into the stomach and float on water. This description of plavini is however quite non-sensical and what William and many free-divers practice is the technique of swallowing extra air into the lungs but actually pushing the air into the lungs under positive mouth pressure. William says he can fill a few extra litres of air into his lungs in this manner which obviously allow you to hold your breath longer. When you use this technique on land you actually feel very full of air which can be uncomfortable and possible dangerous if attempted by inexperienced practitioners, but once you go even a few metres under the water the increased pressure of the water reduces the pressure in the lungs and allows you to feel quite comfortable.

This novel technique for breathing is also described in the  scientific literature as glossopharyngeal breathing (GPB). It relies on the glosso-pharyngeal muscles instead of the respiratory muscles to move air into the lungs (glossopharyngeal insufflation, GI) and out of them (glossopharyngeal exsufflation). In In this scientific article (Lemaître et al, 2009) you can read more about the science of this technique and how it has been used with positive effects by free divers as well as by people with poliomyelitis and cervical spinal cord injury.

It is also very interesting to see how smoothly William swims, dropping with gravity on the way down once he gets past a certain depth and using arms and legs with very smooth action to return to the surface. This certainly yoga in terms of it being art and science of being doing a very stressful activity in a very relaxed and focused manner.

Here are some safe accessible breath-control exercises I have developed and found help people immensely for all levels of internal health and energy.

You can read more about breath-control in yoga and exercise in my recent blogs:

Breathing (Part 1): How to breathe to help your spine, internal organs and energy levels