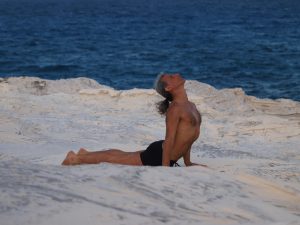 I take the right leg back into hip extension, the hip extensor muscles automatically reciprocally relax the hip flexor muscles so as I sink down into the right hip it doesn’t feel like a stretch it feels like a movement between muscle activation in the back of the body and muscle lengthening in the front of the body. I push the sitting bones forward and that firms the front of the spine, that relaxes the back of the spine and it gives me firmness. Then I bring the head down, moving the head down lengthens the femoral nerve and the spinal nerves. The spinal cord lengthens from the back of the neck all the way down the back of the spine and the spinal cord then comes to the femoral nerve which comes out the front. So you can feel a difference when the head is up, you feel perhaps a stretch or a lengthening at the front of the hip but when the head is down it feels different. It becomes more like a nerve tensioning. This nerve tensioning automatically makes the body feel warmer and is also tensioning the stomach acupuncture meridian. Before standing up, I push the hips forward, that firms the front of the abdomen and it gives me a spinal grip. Front of the abdomen is firm by pushing the hips forward and squeezing the buttocks also tightens the back muscles. So the front and back of my body are firmed as I come back up and that means that I’ve got some sort of core stability. Again, lifting the arms up tractions the spine. I come to do a deep lunge, protecting my knee by turning my foot and my knee out and tightening the knee. Also gripping with the left toes protects the knee, squeezing the right buttocks protects the lower back. I breathe into the abdomen before going down and then pushing the hips forward allows the exhalation to happen naturally. Again, I pull with the fingers and the armpits and push down with the sitting bones – that gives co-activation of the muscles of opposing sides of the lumbar spine complex. That co-activation gives stability, like core stability is thought of. Then I can still breathe comfortably into my abdomen because I am not tightening muscles, which inhibit the diaphragm.

Lolasasa (from the kneeling plank to the ‘tuck handstand’)

Lifting my hips back up I come to the kneeling plank pushing the hips to the hands. If I were to emphasis the kneeling plank position you would see it is actually different than its appearance. I’m pushing the sitting bones forward along with that the hips muscles are active and if I continue to do it, it would do this [Lolasana].  So, that’s quite an active movement of pushing the hips forward. That sense of pushing my sitting bones forward, which you saw, lift me into the air is still happening in the pushing up position.

The kneeling push up or its counterpart the full push up. Notice here also my fingertips are also fully white with pressure, this co-activates the muscles around the wrists, which gives stability. Stability in a push-up position or any weight bearing position on the arms relates to an interconnection and relation to what is going on in your wrists, elbows and shoulders and the upper back and neck. So, to make it more stable I lift the upper back up and push the hips to the hands, I push the arm pits towards the thighs the elbows are strong and they are made further strong by squeezing the heel of the hand inward and that causes supination of the wrist or forearm which uses as you can see as you turn the palm upwards that tightens the biceps. So if in a push up position you try to turn the palm upwards that also tightens the biceps. Pushing down on your hand as if doing a push-up automatically tightens the back of the elbow. So the combination of doing the push-up position while trying to turn the hand outward will give a very strong elbow which helps then support the shoulder which helps support the wrist. Again, keeping the chin to the throat allows for the firmness to reflex to the abdomen and the trunk. It’s easy to make a mistake in the push up and let the elbows come down too far which just rests on the anatomy, keeping the elbows shoulder height is much more challenging.

This tractioning movement is later enhanced and made more challenging by actually lifting the hips off the floor. Lifting the hips off the floor you will see me demonstrate later includes this movement of pulling with the hands; we call it the cobra action. It also includes the movement, which is lifting the collarbone, which we call the plank action. It also includes the movement of the sitting bones forward and down which we can call a lunge action. But it’s like a double-legged lunge. It also includes this movement, which we can call a bow action [Dhanurasana Demonstration] where you can see my shoulders turning out. Shoulders turning out helps open the chest. So you can see all these movements to advance this simple cobra position I can come to what is called the Upward Facing Dog. With the hands next to the lower ribs I lift to the same shape in the air. A common problem with anyone doing physical exercise, including some sort of stretching, is that people just collapse. To collapse here I am just fully and passively hanging with gravity and instantly the lower back becomes squashed. Generally, its better that the body only moves as far as it chooses. So if someone can lie on the floor and then only lift up this high, this is the spinal extension that their spine will want to do and be happy doing. So they should only lift off the floor that high. But to have a person that is only able to lift that far collapse this will cause a problem in their back after some time. On the other hand if someone is strong enough to lift this high than that sort of bend is reasonably ok.

This video was one of a series filmed by David Samulenok of RMIT University for the course entitled Applied Eastern Anatomy.This is a low resolution version of video, higher resolution versions are available in the online courses.